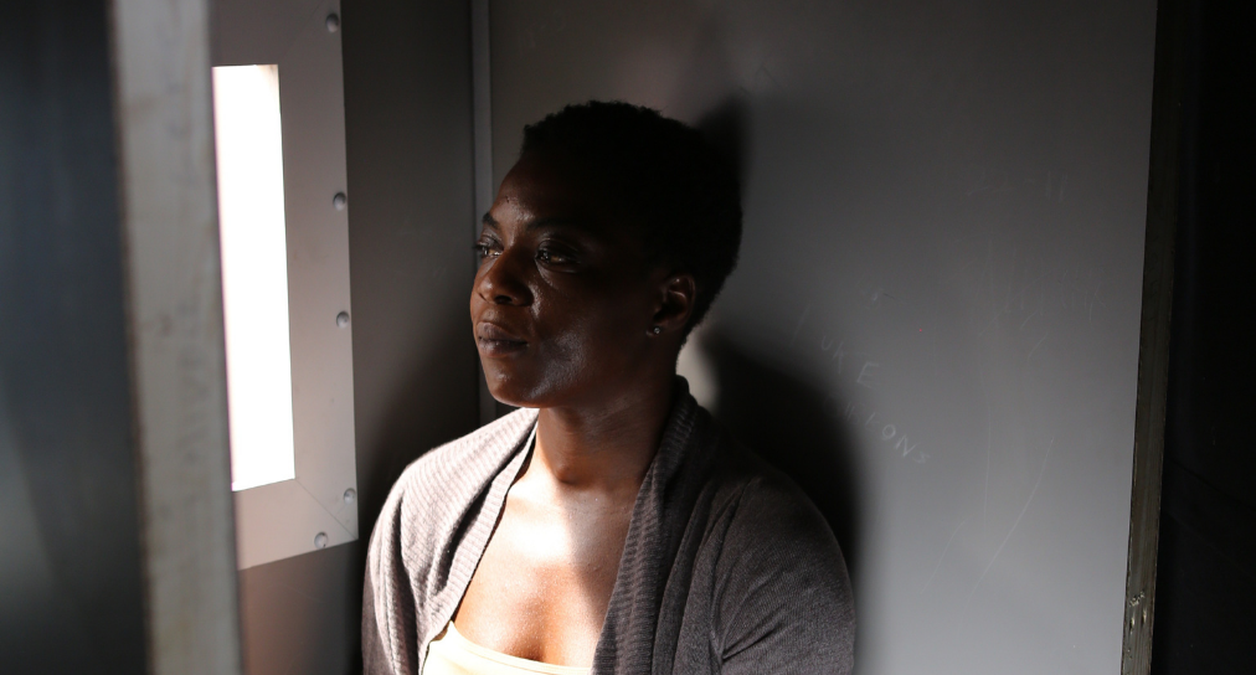 Blog: My Journey with Sweatbox

Actor, Funke Adeleke shares her experience of working on Sweatbox from tour to screen.

The experience of working on Sweatbox was one that I will forever be grateful for.

Going back to the audition stage in 2019, when it was for a tour which would span over a period of a year. I could never have foreseen that we would get to a point where it would be shot into a film and made permanent for people to see.

When I read the script for the audition, I was immediately impressed with the way it was written by Chloë Moss and the fact that it would be performed in a prison van, hence the name Sweatbox. I was mostly struck with empathy for the characters, especially Nina, whom I play. I felt I wanted to tell her story and that I would bring her to life in a way where the audience would be able to see her through the same eyes as myself.

She is strong yet vulnerable, fractured and has been through a system that does not forgive women or give women many chances.

As a team, we were very thorough with our research of the prison system and I was grateful for the insight gained through this research.

As a theatre piece the show runs for 15 minutes, or just under, and the audience come into the prison van to see the show with all the characters in their individual cells. It can be claustrophobic for both cast and audience members, but this makes the experience more intense.

The capacity for audience members was 12 each at a time, so we performed the show six times a day with breaks in between each one to allow people to see it.

On tour we went to Universities, prisons, festivals, and theatres which provided for a mix of audiences.

It was mentally, physically and emotionally exhausting at the end of performance days to go through six shows. But it was also very gratifying to know we were raising awareness for an issue that most of society had no idea about.

The feedback from audience members was always the same, which ranged from shock, to sympathy for the characters and raised questions as to whether this was really the way the prison system is run in the UK.

Fast forward to March 2020, when the pandemic hit and it was announced that the UK should go into lockdown, which in turn put a stop to our tour and brought everything to a standstill. As we hugged one another (Producer Dezh, cast members Posy, Jade, Fran and myself) at Liverpool Street station and said our good byes, I think we all tried to stay positive for the future but we were definitely in shock about what this meant. "Will we be able to do this show again and if so, when?" were some of the questions on our minds. However, for now it was time to say good bye to Sweatbox the theatre piece and head into an unknown future.

Around July 2020, there was some hope in the future about a possibility of shooting Sweatbox and making it into a film to reach an even wider audience. Just imagine where this can be seen. It was going to be BIG!

I was delighted that Clean Break worked hard to make this happen and was even more in awe that they could secure an all-female film crew, working with Quiet Storm Productions. The film was shot on location at the Clean Break building in Kentish Town.

The set was built into the studio with the last scene taking place inside the van. This was very interesting as it was entirely different to the theatre experience. The filming took place over two very long days.

The shooting of the film was different to the theatre in the fact that the scenes were shot in different orders, so my character Nina’s scenes were shot first with me inside my make shift cell on set, while the other two actors read their lines from outside the set to provide for real reaction from my character, vice versa for the other actors as well.

This meant that we had to be careful about things like continuation to make sure that if we took breaks for any reason, we had to be sure that the make-up was the same as it was before the break. All in all, the experience of both the film and theatre production of Sweatbox is one that I will always cherish and be grateful for as it provided an opportunity to raise awareness of an issue that is very important for women who are in the judicial system.

The due care given by the production team of Sweatbox and Clean Break is another thing that I feel so fortunate for. There was space provided for the actors to share anything that we might be having difficulties with regarding the production at all stages of the theatre piece as well as the film production.

The Member support team at Clean Break was always on hand to provide emotional and mental support. This meant that we never felt alone in our day-to-day challenges during the shows while on tour and at home as well as during the film production.

Being a Clean Break Member and the experience of working on Sweatbox has helped me with my work in the theatre industry. I am currently in rehearsals for a play at the Bread and Roses theatre which runs from the 25th of May to the 5th of June. This is a new play by Irish writer Darren Donohue, I and the Village, which explores the consequences of long term in confinement in a system designed to be flawed. A story of longing, survival and hope.

I am playing the lead as Keicha, a 38-year-old from Nigeria who has been living in the Direct Provision System in Ireland for 8 years.

This is no mean feat but one that I am most honoured to play as the character is complex in that she has many layers which you see unravel in the play.

It is exciting to be back in a theatre space in a time when audiences have been denied theatre due to the pandemic and as an actor, it is gratifying to be in employment doing what I love. My hope is that this will continue to be a bright future for theatre and that the industry wakes up from a long forced slumber to recover with exciting productions for audiences who have been missing it.

As we start to reopen I am glad that we can experience live theatre and continue to make work online, like Sweatbox. I hope you all enjoy watching it.

Book now to see Funke in I and the Village

Sweatbox will be streaming for free from Tuesday 8 June