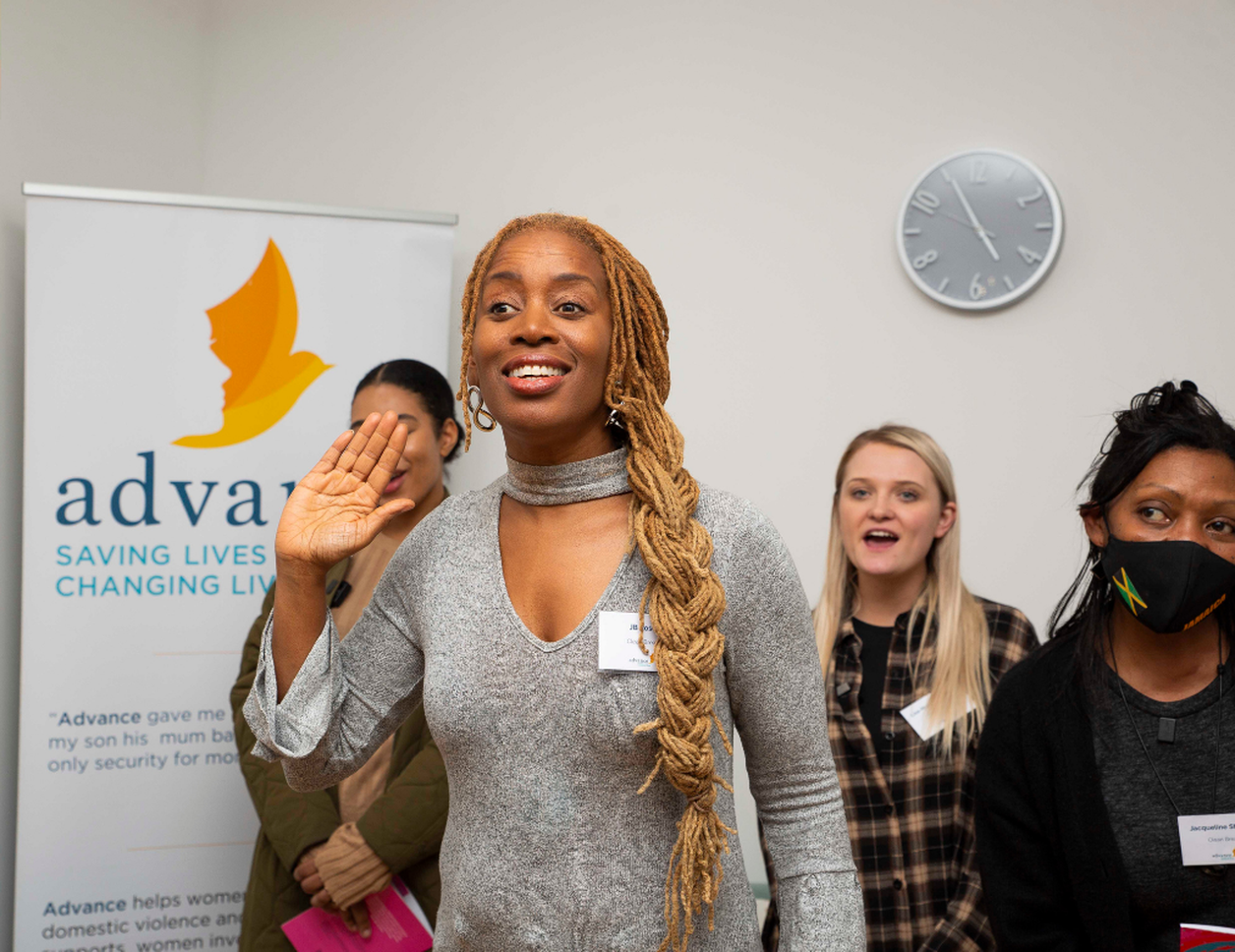 JB Rose is a creative group work practitioner who, with Clean Break, brings music and theatre workshops into women’s centres across London.

To celebrate More Than We Can Bear, Clean Break’s production with the Almeida Theatre, we sat down with JB to speak about her work. The play is about a women’s centre worker, and is part of The Keyworkers Cycle – nine short plays about the people who keep our lives running.

We wanted to shed light on the important work that happens in women’s centres, and the unique and valuable creative opportunities for women that JB facilitates with Clean Break.

Thank you for joining us today, please could you tell us a bit about the creative work you do in women’s centres?

I've been working with Clean Break now for over 20 years, and I deliver singing, voice, song writing, and I'm a drama tutor as well. Those are the titles, but I’m also doing things that you don't see, I support women to collaborate and make connections with each other, so it's transferable skills.

When women come to the centres or Clean Break, they often say ‘I can't sing’ or I’m not good at acting, I don't have any creative ideas’ and my job is to unlock that for them, to shake off those ideas. In our society creativity is very focused on the production of money, making a product so people can earn money. With the women, I always start off by saying ‘before there were records and people earning money there was just the creativity itself’ and that's what we're looking at, we’re looking at your creativity and revealing it. Through a series of very simple activities, we start to unravel that and women start to say, ‘oh I can do that, I can make a sound, I do have ideas.’

When interacting and working with the other women they realise that they have so much in common, and that allows them to build and grow creatively. I feel like I’m uncovering something that's already there, that they just haven't recognised yet. I find it very exciting every time I work with a new group of women. They bring their experience to the table and then when you lift off the covers, fantastic things happen and they shock themselves.

I grew up with youth arts, with fantastic drama groups where we got to go and see plays, but most of the women that I work with, when they get to go on trip to go and see a Clean Break play for example, they’re like ‘what?!’ They’ve never been to the theatre, never been given anything nice like the women’s centres provide. It's really valuable for women who missed out on that in their childhood, it makes them feel like they are worthy and they are valued.

You’ve been doing this incredible work for the last 20 years now, have you noticed changes in your practise and the work over that time?

It's easier now because I can access music and backing tracks with my Mac, when I started we used to have to go to a recording studio with the groups at Clean Break, but now I have everything with me. Before I used to lug around this big heavy speaker to different centres and now I have this little Bluetooth speaker that makes boom boom big sounds!

For me what's changed is the opportunity, because the technology makes it easier for us to create. My approach is always that it’s about you, even without all these things you have so much to offer, and when we add that with the technology - look what you can make.

Could you tell us about why bringing creativity into women’s centres is important?

The women I work with all come from such diverse backgrounds, and they're in touch with the women centre’s for all kinds of reasons. Lots of them say ‘I’ve been told to come here but I hate singing and I can’t sing.’ When I help them to realise that they are creative, and they don’t have to sing, there’s lyrics writing, there’s making sounds, there’s just being together and communing and hanging out, listening to music - it's just as good as singing it or creating it.

I think it's really important for women to unlock and to realise that creativity is at the heart of everything we do, and everything we take for granted. I say to them, ‘the person who created a cup to drink from, that was creativity because up until then they were just drinking from a stream’ and often they’ve never thought about it like that before, unlocking that is wonderful.

In my groups recently we’ve been creating healing mantras instead of doing full blown singing and song writing, because it was over Zoom. I open the sessions by asking ‘how do you feel today?’ and then we finish by asking how you feel now. Often women say they feel inspired do something, or to get up early in the morning, and I write those lines down to create a mantra and feed it back to them. After a few weeks when they get more confident I’ll say, 'these are your words, I've found the melodies over the past few weeks, what if you find a melody for these three lines or four lines?’ and then they create a melody and we’ll sing it, it's very uplifting because it's theirs.

The women will come back and say ‘I've been singing that little song that we made all week, so any time I’ve been feeling low, or I forget everything isn’t as bad as it feels, I've been singing our song it’s really been cheering me up.’ I believe my role is to help them realise that they have so much to offer themselves and others, through the arts.

As you know, we have a play with the Almeida called More Than We Can Bear which tells the story of a women’s centre worker and is part of The Keyworkers Cycle.

Key work is the foundation and the bedrock work that allows us all to do what we want to do. Women are often the mothers, the carers, the cornerstones of families and they're always looked upon to be the dependable, sensible person. If women don't feel good about themselves or if their sense of self has been knocked off course, that could impact their families and their world. It's really important to find ways to support women, because often women find themselves in these centres because of circumstances that could stem from childhood, or being around the wrong people, the wrong decisions, the wrong time, and then that could throw them off feeling good about themselves. So the key work is to make sure that the women are together, are happy, have purpose. Even if they’re not carers or mothers, a sense of self and identity is really important.

Throughout the pandemic over Zoom we would try and encourage the women to use the space and time with me and not have anything interrupt them, but then they would start talking about shopping and cheese and bread, and what they need to do for their families. It was quite funny, we’d go with the flow and once they’d sorted out who’s getting the food I’d say ‘now this is your time for fun.’ They really respected that, and it made them value themselves - this is their hour with Clean Break that they’re giving to themselves. It's a bit like having a spa day, but for your emotions and for your wellbeing.

That’s really interesting, so the caring roles that women play in our society is key work in itself, and the women’s centres do the work of supporting the people who hold so much together.

The work that women’s centres do is really really valuable, I have been so lucky to work in them over the years. I’ve met such a wonderful array of women and the workers who are really committed to supporting the women and getting them into a better place.

Yesterday we went back into the centre at Minerva*, we hadn’t been in the building because of Covid so we’d been using Zoom. I had a whole new cohort of women who had never been to the centre, and they all really liked using Zoom. I had to tell them it will be better in real life when we actually meet in person and we can do it live with the music in the space, but also they look after you in the women’s centre. They make sure they’ve got refreshments for them, and donated toiletries, makeup and things. Looking at the lack of support these women get, it's so nice to see that organisations like the women’s centres are there. It's like a big hug, a big safety net and Clean Break is just the same.

*Minerva is a women’s centre from gender based violence charity Advance, which is specifically for women with experience of the criminal justice system.

As well as your creative work with women, you're an artist in your own right. Could you tell us about your work?

Yes I'm an artist, a singer and a songwriter, but I’m also a YouTube Blogger where I make vegan food. I'm into health and lifestyle, so even when I do singing lessons and we do breathing, that isn’t just about singing, the breathing techniques are also about wellbeing. My YouTube blog continues that idea, we talk about vegan cooking and how to cook healthily, but you don't have to be a vegan.

My YouTube also has my music, I've got a soul music single which came out last year called Gold and another single called Back to Love, which did really well in the soul charts, and I’ve got more songs coming out this year. Now I'm adding to all of that with the mantras which I’ve been making with the women I work with, so now I'm uploading lots of these. The mantras are there to help people get in the zone, to be peaceful, and to unlock creativity.

You can find out more about Clean Break’s work in women’s centres here.