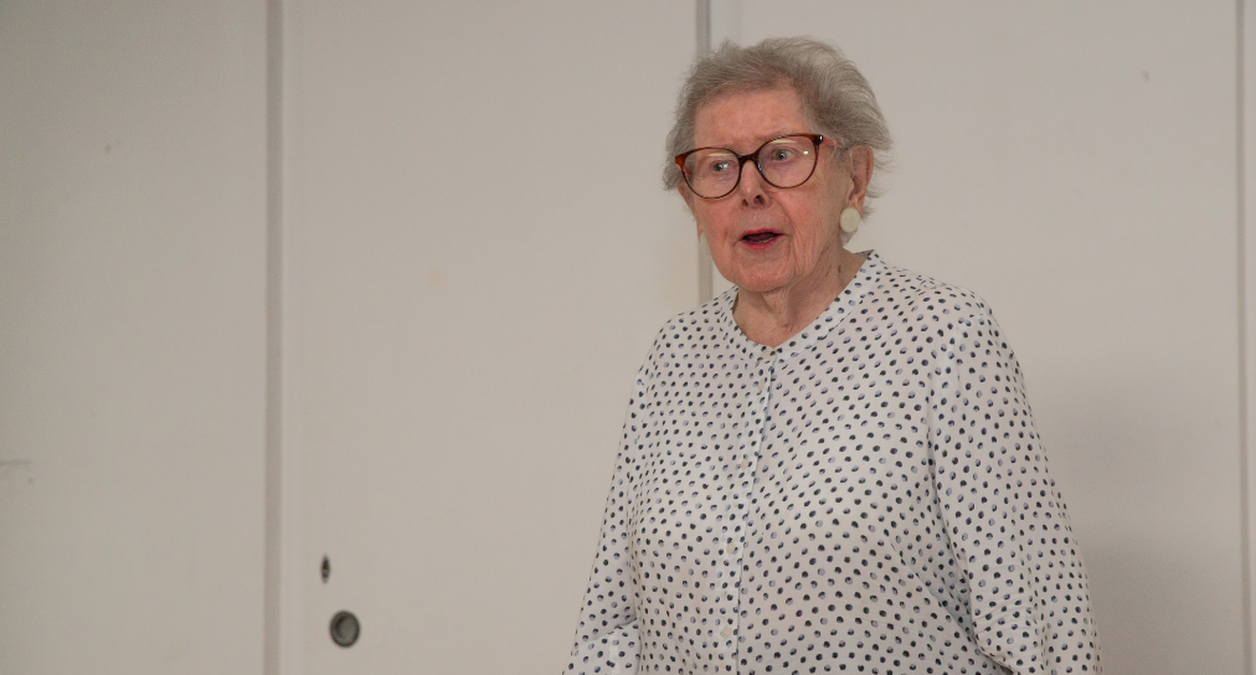 Barbara was an extraordinary woman whose legacy will live on in the organisations she championed, such as Clean Break and the International Women’s Forum which she co-founded, and in the women she mentored and inspired throughout her life. I was lucky enough to be one of these women and it is a great pleasure to share something of Barbara’s life history and why Clean Break was so close to her heart.

Barbara grew up in Cornwall in a farming family. By her own account, she didn’t have an easy childhood although her mother kindled her early interest in music, which became a lifelong passion. Her promising education was cut short at 16 in order to support her family as a typist when the family farm went bankrupt. She clearly had a strong sense of adventure and self-belief because at 21 she left Cornwall for London, working briefly on a magazine and then taking a women’s adult education course at Hillcroft College, where Clean Break used to work in partnership. Following three years in Tanganyika working for a copper mine – the first of many all-male environments where she found herself – Barbara returned to London to pursue a career in politics and the media. She became an Islington Councillor but decided against standing as an MP when she realised that she would have to compromise on her own principles – in this case, her support for the Campaign for Nuclear Disarmament.

Instead she joined the Civil Service as a press officer and went on to work with Labour PM Harold Wilson, unusually staying on to serve under Ted Heath when the Conservative Party came into power, drafting speeches and accompanying him on major political visits. Later in her career she was controller of information services at the Independent Broadcasting Authority, helped to set up breakfast television and was a non-executive director at Westcountry Television.

Throughout Barbara’s life she championed women’s rights: creating networks of women across national and sectarian divides, playing a leading role in the 300 group to secure the election of more female MPs, and pursuing equal pay for women. These activities and her evident self-belief meant she fast became a powerful and compelling role model for other women. This continued right through to her final decade when she came out as a lesbian and wrote and published her memoirs Exceeding My Brief: Memoirs of a Disobedient Civil Servant.

Around this time, Barbara joined us in the Clean Break building to celebrate her 90th birthday. In typical Clean Break style, we had tea and cakes with company Members and staff. She regaled us all with stories of her life and offered advice and encouragement on how we, too, could seize opportunities and live life to the full. It was a joyful occasion peppered with jokes and anecdotes. We all absorbed some of Barbara’s wisdom that day and were inspired by her infectious sense of self-belief and can do attitude.

This is what I loved about Barbara - she made you feel like anything is possible and that no barrier is too big to overcome. I first met her when I joined Clean Break in the late 1990s when we were about to start renovating our new home in Patshull Road, Kentish Town. She had joined the company in the early 1990s as one of a stellar group of Patrons, whom then Director Alex Ford had brought on board to help fundraise for and find our new base. Instrumental in the evolution of Patshull Road, I suspect she was also key to growing the company’s ambition and stretching our horizons way beyond the wildest dreams of the company’s founders Jacqueline Holborough and Jenny Hicks.

The company’s development gave Barbara enormous pleasure; she sent me an email in 2016, “When I remember my first days with Clean Break – a rehearsal space not much bigger than a cupboard I marvel at how far we have come.” But although the building came to embody much of the company’s ambitions, it was the women we worked with and their journeys that connected Clean Break to Barbara.

I last saw Barbara, pre-pandemic, at the Reform Club together with her longstanding partner Margaret Hyde – another good friend and supporter of Clean Break. As usual, she introduced me to many people over lunch – she was always a great connector – and we then had a tour of this venerable old institution. It was founded with radical beginnings and, in 1981, became the first of the traditional gentleman’s clubs to allow women to become members on equal terms. Barbara took us up to the top of the building and into a small art gallery. Here she proudly shared some of her own paintings displayed amongst the artworks – new pieces from weekly art classes that she had taken up in recent years. This was typical Barbara – telling us that you are never too old to learn something new and to share your creativity with friends.

It goes without saying that Barbara will be much missed by us all. Her spirit and love of life and ambition for women will be an enduring legacy.