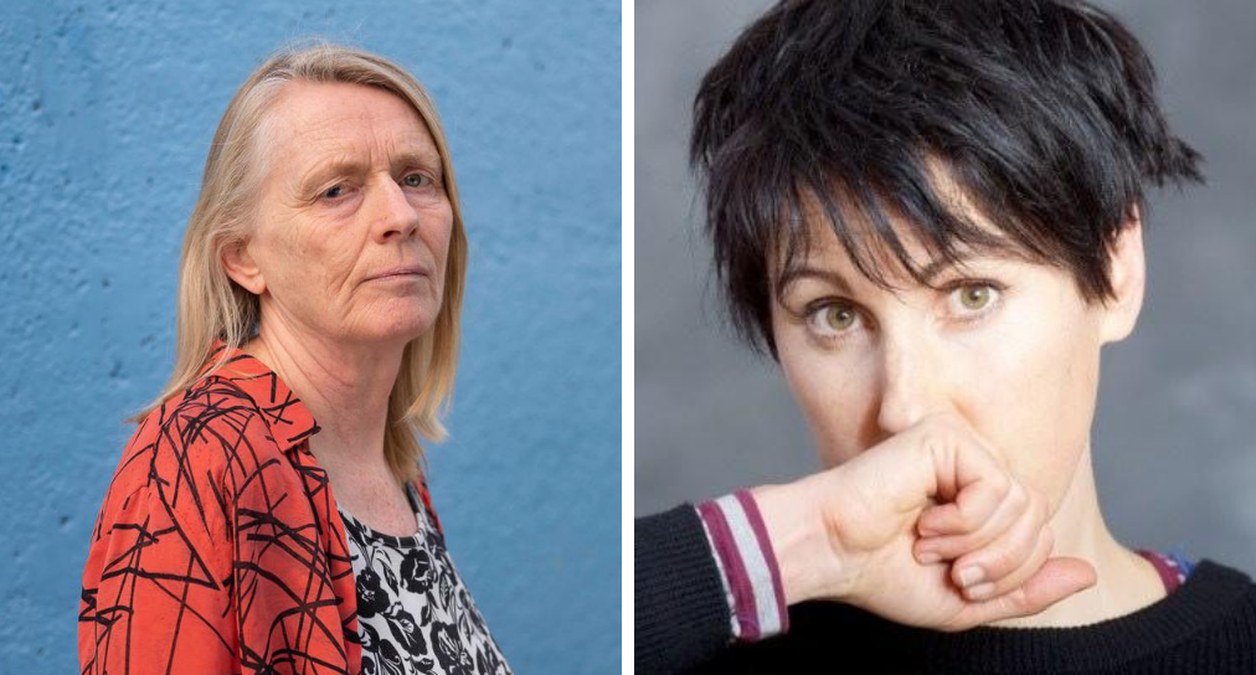 Over 8 weeks during lockdown twelve pairs of Artists met digitally as part of Clean Break's 2 Metres Apart project. It was a space to work creatively, share ideas, and see what arose from the process whether that was to co-write together, to each respond to a selected stimulus, or for one artist to write for their partner to perform. The project was focused on practise rather than product, providing our collaborators the space to explore and experiment.

In three blogs, we have asked 6 of our Artists to reflect on the process of this new way of working, published alongside their collaborator. In our first blog, Lucy Edkins and Sonya Hale share their experience of working together and the triumphs and challenges of making work under lockdown.

Mid April
A lockdown collaboration sounded like a lifeline to me. My two foster girls have just moved back in with their aunt after a total meltdown induced by lockdown insensitivity to their case from the powers that be. My son and I, enjoying the calm after the storm, were frequenting my little studio near Markfield Park so that we could have a change of scene and get into a bit of spray painting.

In the midst of producing silly self-tapes for adverts, writing up the answers to the Clean Break questions was a welcome slice of reality. In keeping with the self-taping, I filmed the answers in the studio kitchen while my son struggled with his home schooling and people worked around me.

Early May
A month after the girls left, I get an email to say I’ve been successful – it starts almost like a rejection, saying how many high quality applications they’ve received, so I was steeled for that, but very happy to get accepted, and later was pleased to see how many familiar faces I saw on the project.

Sonya seemed as keen as I was to get the ball rolling. We were emailing the next day and by Friday I was at a street party with kids doing sponsored runs for the NHS and bunting up for VE Day. After a comedy moment trying to answer my phone, I took the call around the corner away from the noise and we got chatting. Sonya was energised and inquisitive – her method was to fire off a lot of questions, some of which I could answer there and then, some of which I hesitated to share with the neighbourhood.

So, the next step was writing. I did my best to keep up. Essentially, we bashed out the idea pretty quick. Then it was a matter of responding in different media... I was creating a body of work in spray paints, inspired by my son’s enthusiasm for the medium and our creation of a character who did the same. We began by talking up the possibility of a short film idea. I would do a lot of the filming, create ideas for visuals, perhaps do voiceovers, and Sonya would concentrate on the written structure of the piece, the plot, etc.

Sonya worked by getting responses and pulling the various fragments together, always checking in to make sure I was happy with the process.

It became apparent that a short play fitted more into the expectations of the project and what we were able to achieve in the time given. Sonya got busy and thrashed out the results of our to-ing and fro-ing and I responded with a few little edits.

I think the blend of our voices was an interesting and stimulating process, and, given more time and commitment, could produce a unique and engaging piece of work. I hope Clean Break are able to continue to support these kinds of collaborations between Members. 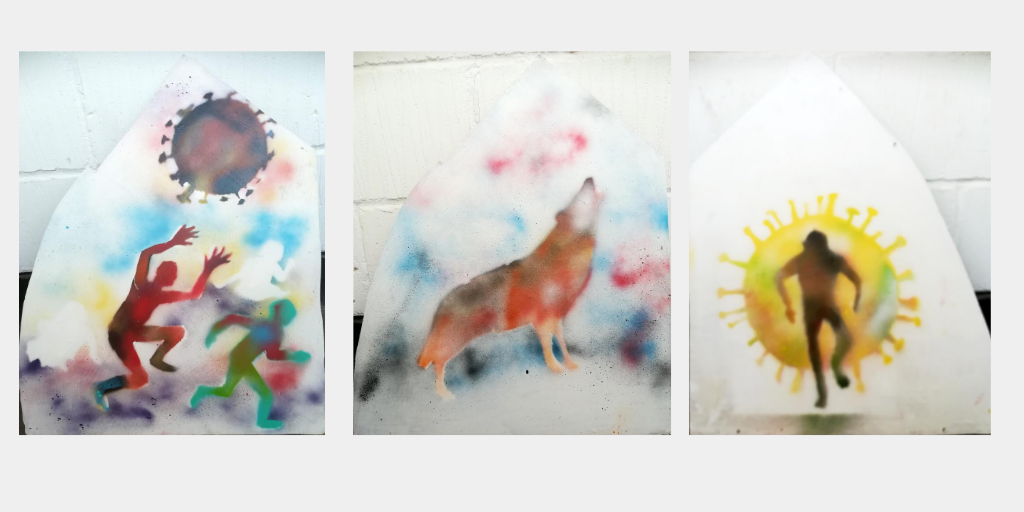 I was delighted to be asked to do the 2 Metres Apart project and even more delighted when I was partnered up with Lucy Edkins. I didn’t know Lucy but had, however, seen her perform in Inside Bitch at the Royal Court theatre and I was very impressed. When we got chatting we discovered we had many things in common; Lucy and I both have a ‘colourful’ past, we both have teenage sons and we are both interested in a variety of arts. Lucy, however, usually expresses herself through fine art while I more commonly write. Initially Lucy said she didn’t want to write but when I read some of her amazing work I knew she had to. Similarly, initially I said I didn’t want to perform. However, after discussion we both encouraged each other and embarked on a real partnership whereby we would both write and perform.

To start with we decided just to have fun creatively; we embarked on a game of artistic consequences whereby I would write or draw something and send it to Lucy who would respond by writing or drawing (or painting) something inspired by what I sent. We wrote and painted some great things. I had not painted since high school so it was an incredible experience for me. What emerged was a lot of wolves and moons and howling and also lots of references to the sea. Also, two strong characters started to emerge, namely Spray-girl and Tent-girl. Spray-girl was very much inspired by Lucy and Tent-girl was very much inspired by me. Lucy sent many images and ideas and I started to weave them together into a short story. Once we had the basic framework for the short story, we could start to shape some of the poetry that we had written in our game of consequences and chisel it into shape to fit with the tale we wanted to tell. Lucy wrote a lot of beautiful, exciting poetry so we decided to include a lot of direct address monologues in the piece. It worked really well.

Working with Lucy who is very creative but historically expresses herself in very different ways to me really encouraged a little artistic explosion whereby we both felt inspired by each other to work in different ways. I have not drawn or painted for many years and I felt very rusty when it came to this. However, our experiences like this in real life became fuel for events in the story that we wrote. In the story Tent-girl, like me, has never expressed herself artistically before and in the story we wrote, as in life, the two girls would never have met before if it hadn’t been for coronavirus but thanks to the lockdown situation they end up sharing a lot of artistic work and uniting on this.

This project, for me, felt like so much more than just a coming together to write a piece for a commission. Lucy and myself really worked as a partnership; we encouraged each other to express ourselves in new, unique and beautiful ways. We submitted the first draft of our little story and I hope that we get the opportunity to work together more in the future, to sculpt it and then perform it together. But more than that I hope Lucy and myself continue to encourage each other creatively, by continuing with our game of artistic consequences amongst other things, to see what else emerges for the future.